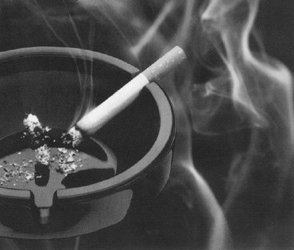 SMOKING is the single most important source of preventable disease and premature death in The United States today. Cigarettes cause one out of every five deaths in the U.S. today. While this figure will gradually decline to one in ten deaths in coming decades, this is still completely unacceptable.

More than 30 percent of coronary heart disease cases are attributable to cigarette smoking.

More than 30 percent of all annual cancer deaths are attributable to smoking. 86% of lung cancer is caused by smoking, and lung cancer is now the leading cancer killer in women as well as men.

Smoking is responsible for one-quarter of all deaths caused by fire.

Involuntary smoking is a cause of death and disease, including lung cancer, in healthy nonsmokers.

More than 80 percent of chronic obstructive lung diseases, including emphysema and chronic bronchitis, are attributable to smoking.

Tobacco-related disease places a tremendous financial burden upon the persons with the disease, their families, the health care delivery system, and society as a whole. California spends $5.8 billion a year in direct and indirect costs on smoking-related illnesses. Nationwide, the figure is $56 Billion annually.

Cigarettes are the second most heavily advertised product in America today, after cars. The tobacco industry is spending close to $4 billion per year promoting cigarettes, or $15 per head for every man, woman and child in the U.S.

Tobacco companies claim that they do not advertise to children. But the tobacco industry needs to recruit 5000 new smokers every day to replace those who are lucky enough to quit or unlucky enough too die. Who are these new recruits? They are our children.