Red Ribbon Week is by far the largest and oldest drug prevention campaign in the country, and one of the most effective for preventing drug use among youth.

The Red Ribbon Week health observance is actively celebrated in nearly all US middle schools and high schools, which have locally based campaigns for Red Ribbon Week every year.

Speakers at school assembly programs, educational videos, student skits, and other programs and activities are offered.

Red Ribbon Week empowers communities and individuals across the US, especially youth, to take a stand for drug prevention and education.

We have listed some activities, information and resources for Red Ribbon Week below, and at bottom, the dates of related health observances.

We recommend our award-winning educational video for Red Ribbon Week 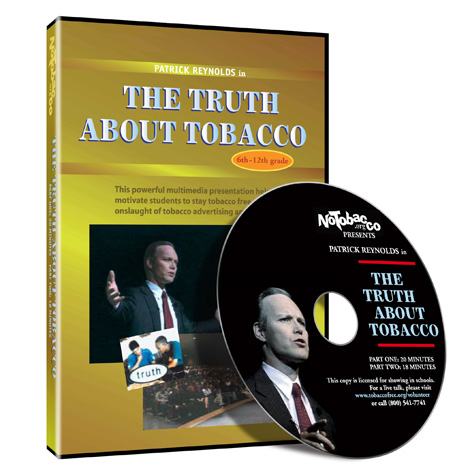 The Truth about Tobacco, 2011 Edition

Our critically acclaimed educational video for schools and institutions

For 6th – 12th grades
Licensed for showing in schools

UP TO DATE with current info and graphics

Make one call to ask a hospital to sponsor this speaker’s school assembly program — at no fee to your school! Hospitals often quickly sponsor the full cost.
See our Five Minute Plan to bring this program to your school. 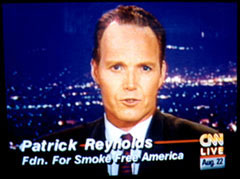 Patrick Reynolds is a grandson of the tobacco company founder, R.J. Reynolds, but the family’s brands, Camel and Winston, killed his father and eldest brother.

This nationally known smokefree advocate is a popular motivational speaker at schools, hospitals and colleges around the nation.

Hospital Community Relations or Marketing Directors frequently sponsor his talks, in part because press coverage of his appearances is strong and positive. This acclaimed program builds goodwill for sponsors, and is an excellent outreach for hospitals.

Why not make one brief call to a likely local sponsor? See who to call and what to say.

Let them know that space permitting, members of the local community may be invited, and that the person assigned to tobacco control in your local county health department may assist by booking more schools in the area.

“In a little over an hour, Reynolds went from being just another anti-tobacco speaker to something special,” commented a front page story in one local paper. See recent news coverage.

“Within the first five minutes, I was amazed to watch Patrick Reynolds create an extraordinary bond with our school’s culturally diverse and economically underprivileged teens,” said Hali Rosen, a teacher at Hawthorne (CA) High.

“After his opening story about his own father’s absence, and the sadness and anger he felt as a youth because of it, he asked the students, ‘How many of you do not have your biological fathers living at home with you?’ When over 50% of the audience slowly raised their hands, our students seemed to realize that these shared emotions cross all economic and social borders — and a bond was formed.

“After that, the students listened quietly and respectfully, and I could see real interest in their faces, as they related to his overheads and the moving stories he told, so very effectively and skillfully.”

An outline of his youth program follows below.

For details about his talks for adults, please scroll down this page.

Our new educational video of his live talk

Emphasizes the addictiveness of nicotine

Opens students’ eyes to how tobacco ads manipulate our youth

Gives students a formula for saying no, with clear examples

Offers an initiation into life, rooted in ancient traditions. “The core message of my brief initiation today is this,” Mr. Reynolds says, “first, to gently open your eyes to the reality that there’s bad in the world — and that life brings everyone some painful moments and obstacles. It’s by staying with whatever difficulty life throws at us that we heal, and solve our problems — not by running away. But many adults escape their pain with cigarettes, food, alcohol, drugs, TV, or even work. A lot of teens use music. Instead, when problems arise, don’t alter you mood by running away to these. Stay with your problem, and talk to others about it — a trusted teacher, your parents, the school counselor, your friends. Stay with the problem, and talk to someone. You’re initiated now
— and a little closer to the world of adults.”

A recurring theme: stressing the need to talk about problems to another person, and not isolate

The touching and powerful story of Sean Marsee, a young track star who died at 19 from chewing tobacco, illustrated with heartrending before and after overheads.

Hilarious overheads which make fun of Joe Camel, in a hospital bed, and the real Malboro Country: smokers puffing — and coughing — outside an office building door.

Restoring students’ faith in the future In this age of terrorism, student worry about the future has become more widespread. This five minute section near the end of Mr. Reynolds’ talk empowers youth to deal more effectively with their doubts and fears about the future, and helps to restore their faith in the coming years. This gives students a tangible reason to hold on to their health. Mr. Reynolds motivates students to 1) Talk about their worries and fears to another person, 2) Affirm the positive, with real-life examples given, 3) Reevaluate: what is real wealth, anyway? 4) to “Catch my faith, my rock solid faith in the future.” He concludes, “So stay
tobacco, drug and alcohol free, for the wondrous, amazing years ahead. Don’t smoke, don’t drink and don’t use drugs — because you’ll need your health, every precious bit of it, in the incredible future that’s coming.” To preview this section, see Video or Audio Clip 5 on our clips page.

A closing promise: “One day we will have a tobaccofree society. And, ladies and gentlemen, we’re going to have it because of you — you are the future!”

Space permitting, Mr. Reynolds encourages sponsors to invite members of the local community to his middle and high school talks, and to immediately follow with a Town Meeting about  smoking, after students return to class.

Tobacco is a truly important global issue: one out of three people worldwide are currently addicted. As a result, in coming decades smoking will kill 500 million people who have already
been born, according to the UN. This means that 9% of the present world population will die because of cigarettes. 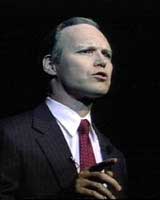 Tobacco Wars!  The Battle for a Smokefree Society educates and inspires college students, community members and health conferences. Interest in Mr. Reynolds’ talk among students, faculty, the community and the local press has been strong.

This highly motivational speaker reaches the hearts and minds of his audiences. Mr. Reynolds speaks vividly and movingly about his memories his father’s and eldest brother’s deaths from smoking.

He offers his insightful perspective on current tobacco issues, including the influence of the special interests over Congress, the World Health Organization’s Global Treaty on Tobacco Control, the Federal government’s lawsuit against the tobacco industry, the cutting of highly successful tobacco prevention programs by many States, and the new wave of States which have recently passed Statewide 100% smoking bans. He updates audiences on the state of tobacco control in their State, and suggests what can be done to further change. He closes with his promise and personal vision of the coming tobaccofree society.

Mr. Reynolds informs audiences that the tobaccofree movement has made its greatest progress at the local level of government, passing hundreds of 100% smoking bans, and also in the Judicial branch. But it has made almost no progress in Congress, and has had mixed results in the 50 State Legislatures. He believes this has had much to do with the millions the tobacco industry donates each year to politicians’ election campaigns, and makes a case for strengthening campaign finance reform laws.

Time permitting Patrick enacts the touching and powerful story of Sean Marsee, a young track star who died at 19 from chewing tobacco, illustrated his story with shocking before and after overheads. For comic relief, he shows hilarious overheads which make fun of Joe Camel, in a hospital bed, and present Malboro Country as a group of smokers huddled outside an office building’s back door, getting their nicotine fix.

He briefly discusses the other major addictions prevalent in our society, such as drugs, alcohol, food, and more. “Looking at the big picture, these national addictions we have are a way of
avoiding our pain, and changing our mood. But it’s better to deal with the problem at hand, instead of running away with diversions like these,” he says.

At colleges, reviving an ancient tradition, near the close of his talk he initiates students into life. The core message here is, “Most adults know that at times, life brings some pain. It’s designed to be that way.

“When tough moments come, and they will, don’t escape by using tobacco, drugs, alcohol, or even food, music, or work, like so many adults do. Instead, stay with the problem, talk to others about it, and take steps to solve it. Talk to someone, whether a trusted teacher, your parents, your friends or the school counselor. You can do it!“

Finally he offers a closing promise — his inspiring vision of the coming tobaccofree society.

Mr. Reynolds combines educational aspects of his talk with highly motivational and inspiring sections. This combination makes for an uplifting, educational and unique lecture  wxperience. 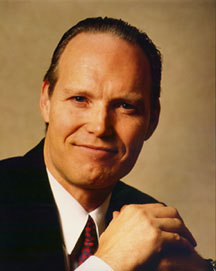 Patrick Reynolds’ appearances in the national media and before Congress have made this grandson of tobacco company magnate R.J. Reynolds an internationally known and respected advocate for a smokefree society.

Mr. Reynolds saw his father, oldest brother, and other relatives die from cigarette induced emphysema and lung cancer. Concerned about the mounting health evidence against tobacco, in 1986 he became the first tobacco industry figure to turn his back on the cigarette business. In the words of former Surgeon General C. Everett Koop, “Patrick Reynolds is one of the nation’s most influential advocates of a Tobaccofree World.” His book, THE GILDED LEAF, published by Little, Brown in 1989, was a bestseller, and he founded The Foundation for a Tobaccofree World in the same year.

A dynamic speaker, Mr. Reynolds entertains, educates and motivates audiences. And the media coverage of his appearance will bring the smokefree message to your entire community. Patrick Reynolds has addressed Congress, State legislatures, major corporations, associations, health conferences, universities, and high and elementary schools. It is in the latter category that he now wishes to devote the majority of his attention.

Mr. Reynolds has been called powerful, inspirational and motivating. His dynamic talk makes a lasting impression, and media coverage has been consistently positive and strong.  sponsors will build a valuable bridge to their community.

Volunteer five minutes
Make one local phone call to a likely sponsor, to bring Mr. Reynolds in to present a motivational talk in your city. Your phone call proposing this idea may soon result in a live talk to youth or adults, and you’ll have made a difference in your community. Please take a minute and look over our suggested local sponsors and talking points.